Last Saturday, This Time Foundation and the Apl.de.Ap Foundation hosted the “Time For Hope” Gala at the Beverly Wilshire Hotel in Los Angeles, with many Filipino-American artists and humanitarians in attendance.

“It’s all about bringing awareness to these things that aren’t talked about,” said actress and one of the emcees for the night Tamlyn Tomita.  “I’m only a quarter [Filipino],” she continued, stressing the importance of “exercis[ing] the openness of our hearts.”

“I’m a big supporter of human rights,” American Idol runner-up Jessica Sanchez remarked. “Honestly, I would love to support every other charity,” she laughed. “What [Apl.de.Ap]’s doing is amazing. I’m completely going to support him and I’m so happy to be here.”  She also performed two songs for the night.

Many stars expressed their support for and amazement in Apl.de.Ap’s work. Actor, martial artist, and “Chairman” of Iron ChefMark Dacascos with his wife Julie Condra said, “We think [Apl.de.Ap]’s amazing. Our kids think he’s amazing. And, where is the love? The love is here tonight.”  The other emcee for the night went on to say, “We have three kids ourselves, and anything we can do to help, especially those in need, we are there.”

Actor Lou Diamond Phillips also commented, “I’m just so completely proud of him. First of all, we’re huge fans, and we’re really thrilled to have gotten to know him over the past couple of years.” He continued, “He sang the song ‘Where Is The Love?’ and he’s making it happen … It’s a very special thing to be a part of.”

The night consisted of a red carpet press event and cocktail reception followed by an awards ceremony, global cuisine catering, a live auction, and special performances by Apl.de.Ap and friends.

Honoree of the night’s Spirit of Inspiration AwardApl.de.Ap said, “It feels great. I feel honored. I feel blessed. I feel very supported and embraced by my fellow Filipinos and everybody in the room.”  Apl.de.Ap is also working on The Voice of the Philippines and his own music career.  He stated, “One of my dreams is to make a solo album and that’s what I’m focused right now on.”

Other attendees included Tia Carrere, actress and Grammy award-winning recording artist; The Lylas, a four-woman singing-group consisting of Bruno Mars’ four sisters; Fritz Friedman, Senior Vice President of Worldwide Publicity for Sony Pictures Entertainment and honoree of the Spirit of Humanitarianism Award for the night; among others.

As Apl.de.Ap and his guests celebrated his educational advocacy campaign, his “We Can Be Anything” slogan was greatly emphasized.

With a night full of cocktails, awards, live performances and an auction raising money for the foundation, this night was definitely a night to toast to. 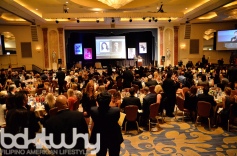 One response to “[BakitWhy] A “Time For Hope” on the Red Carpet with Apl.de.Ap and Friends”

I am a Music lover, Guitar player, Journalist, Dreamer, Lover of the outdoors and Old soul in a young body. Your average 20-something broke girl.

To keep my site running and to keep the content flowing, I’d appreciate any donations of any amount. These funds go directly towards supporting this blog (travel, gas, time commitments to writing, etc.).

Visit paypal.me/rcauilan to send a donation. Any amount is appreciated.